So, it's Sunday night and I've had a fun but tiresome weekend at Islands of Adventure (where HP World is) and Busch Gardens in Tampa. Even though we live like three hours from Orlando, we hadn't made it down to Harry Potter World yet. Here are some pics - if you haven't been, this could be considered a spoiler, so consider yourself warned. 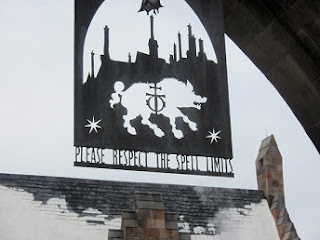 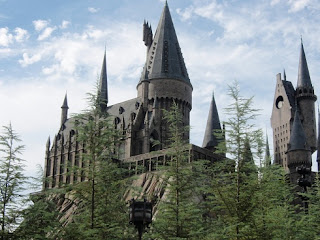 The sky was behaving and gave me a nice backdrop. 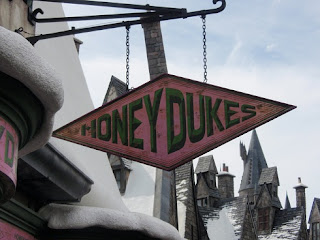 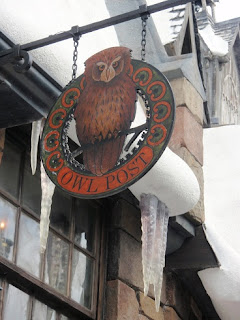 You could actually send yourself real mail from here. Like an acceptance letter to Hogwarts or something.  How rad is that??? 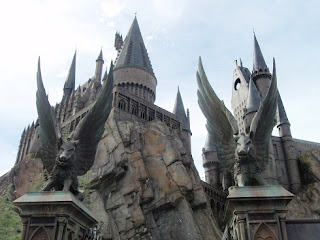 And another of Hogwarts with the cool statues. The sign was cool too, there were these sparkly silver lights that kept lighting up behind 'Hogwarts School of Witchcraft and Wizardry', to make it look like magic. It was a very fun weekend. The Hogwarts ride is really cool, even for a wimp like me. I only screamed once :)
Blending into my usual Monday meme... I don't know about you, but when I'm at theme parks, I usually have the urge to pick up a few souvenirs. Like, half the stuff in the Harry Potter store, some Grinch pajamas, a few things in the Marvel gift shop. So, when I'm a famous author, I'll go on a wild theme park shopping spree that would put Kim Kardashian to shame... not that she'd shop at a theme park. And then, to make up for my materialism, I'll make a large donation to the endangered animal fund at Sea World and Busch Gardens.
So, what theme park goodies do you want to get your paws on? What's your favorite theme park?
Posted by alexia at 11:21 PM