Warning: this is going to be a really long post. Maybe my longest ever. Since this is my online journal, I want to be able to come back and read it myself when I forget all the shiny details. So, I won't blame you if you skim!

My World Fantasy Convention 2011 adventure began with 13 hours of travel. Two hours driving to the Jacksonville airport. Three hour layover in Denver, where it was 28 degrees and everyone stared at me in my flipflops. One coast to the other. But, finally (!!!) I arrived in San Diego at about 6 PM on Wednesday evening.

I checked in to my room, which was in a building at the far side of the resort. There was an incredibly creepy picture of a little girl in a Victorian dress right over my bed. I unpacked and went to have dinner by myself in one of the resort restaurants, complete with a well-deserved glass of Pinot Gris.

The next morning I changed rooms to the tower closest to the con center, since that's where the con suite and all the parties were. That way I wasn't stumbling in the dark back to my distant tower after all the parties (the infamy of which preceded them). After I settled in, I walked over to the bus station with the intention of going to the gaslamp district, but then I decided I didn't want to hassle with figuring out the bus routes and stuff. I went back to my room and had a massive small pity party regarding the fact that I didn't know anybody and had nothing to do, and decided to take a two hour nap. When in doubt, naps are the best remedy :)

The conference started at 3PM, so a little before then I went down to the con suite (officially known as the hospitality suite) and discovered they had free food. It ended up they served three meals a day, which saved me lots of money. I bucked up and started to talk to people, including a really cool chic named Kelley Caspari, who is a bronze sculptor with art on display at the art show in the con center. Then I headed off for my first panel!

At the panel, I met up with fellow blogger Liz Briggs and her husband. After the panel, I recognized Elena Solodow from her blog picture (plus we all had these handy nametag necklaces), and she introduced me to her roommate Stephanie Loree. At some point later I got to meet more blog friends - Carolina Valdez Miller and Matt MacNish. Pity party over!

After the opening ceremony, people from the San Diego Zoo brought over an assortment of super cool animals. My fave was the white-bellied pangolin. I didn't take this pic. The San Diego Zoo did. Those flower petal scale things? Covered in soft fur like a mole's. Rad. 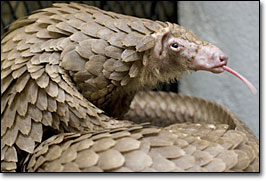 At around 10 we headed to one of the bars, which had been dubbed the "official" conference bar. I was just wondering aloud whether Neil Gaiman was hiding in his room or was going to make appearance when he walked in. No, he didn't get swarmed. People stayed pretty cool. Although, at one point when I went to get more wine at the bar, I heard music and turned to see someone playing a ukulele and singing. While standing five feet from and looking directly into Neil Gaiman's eyes. He left shortly thereafter...
My last stop of the night was the Australian party. Earlier in the day candy-colored fliers had gone up about this party. I asked somebody, "What's the Australian party? Is it literally a party thrown by the Australians?" To which the reply was yes - Garth Nix and entourage. So, I went and of course made my way to the bar for a glass of wine. A nice gentleman poured me one, and I looked down at his nametag. Garth Nix was pouring my wine! Holy….wombat.
Friday morning panels started at 10 AM. Later in the afternoon, I went to a reading by Neil Gaiman. He's just so fantastic. I feel like I'm not a worthy fan, since I just read Neverwhere like a month ago, but it was so amazing I was instantly addicted. Besides, I've intended on reading his books for years. Does that count? Either way, I went, I listened, I swooned. He read for almost an hour. I caught a glimpse of super-agent Merrilee Heifetz who discovered Neil when he was really young... and of course began fantasizing about bumping into her and talking about my books, and her loving them and me, and I got quite carried away. Totally didn't happen, of course.
Later that night was the autograph session, and me and Elena and Stephanie stood in line for an hour or so to get Neil to sign our books. Some people were laying down on the carpet. We sat for a while because we had a lot of books and my feet were killing me. I brought one of my Sookie Stackhouse books for Charlaine Harris to sign later, and there were two people in line ahead of me. Poor Charlaine, she was totally overshadowed by Neil. Liz said Charlaine actually stood in line for Neil's signing like everybody else!
After that we hit the parties. The big parties of Friday night were publishers Tor and Nightshade. The Canadians also threw a party, with maple syrup and maple syrup flavored cocktails. And some other weird cocktails with rye. I met a couple agents, one completely by accident who asked if I wanted to query him after I'd been blabbing about movies and kids and God knows what else for 20 minutes. Apparently I passed the crazy-writer test (shocking!). The other I'd seen on a panel, and she invited me to query, too. Fingers crossed...
Saturday sprang on me rather frighteningly. It was my last day at the conference, and the time had flown by. My first panel was at noon, and one of the panelists was Tamora Pierce, whose books I read as a tween, and who was one of the first authors to distill in me a love of kick-ass sword-wielding heroines. She had the room in hysterics when she mentioned that there were "hydraulics" issues pertaining to zombie sex (yeah) and that if Edward Cullen was so ice-cold and marble-like all over, Bella wouldn't have been happy with certain parts of his anatomy. ROTFL.
Went to more Neil Gaiman stuff later, and more panels, took a nap, and hit the art show to support Kelley since it was her big night. After that was a fun panel about faeries with Holly Black as one of the panelists. Holly Black, whom I didn't recognize when she was standing outside the room, and thus began to babble with about women and mirrors. If that doesn't make sense, it's probably because you're a guy. After that panel, more parties! The final evening was dominated by the British, Edge publishing, and SFWA parties. At the British party I was made to try something called marmite with wicked enthusiasm. It looks like chocolate syrup. It does not taste at all like chocolate syrup. We all ended up getting shooed inside by hotel security, which I found incredibly amusing. Writers? Noise complaints?
Sunday morning I had to get up at 8, finish packing, and head to the airport. I got back to Jacksonville at 9:30PM Florida time, and had to drive the two hours home. And then couldn't fall asleep since I was on California time. So yeah, arriving at work Monday at 8AM was real fun.
In summary - loved it. I'm not good at introducing myself to strangers, so I was really nervous about flying across the country where I would know no one. But I ended up meeting lots of blog friends and making other friends, and I think that was the best part. Just being inundated in writing with other writers all weekend. It rocked. Next year WFC is in Toronto! And after that Brighton, England! I doubt I'll be able to travel that far, but a girl can dream, right?
Posted by alexia at 11:20 PM