I've already read Cloaked in Christmas, and it's definitely a 5 star super fun and steamy paranormal romance! I really like the Cloaked series, and I think this one is my fave so far. Set in Finland near the North Pole, it has wolf shifters and snowy forests and hot cocoa and blazing fireplaces and SEXY bits and a sweet romance all in one!! Loved it. And it's 99 cents! 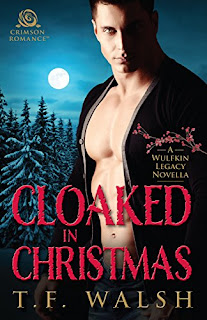 Here's what T.F. has to say about the setting:


When was the last time you built a snow lantern on your front lawn?

In Finland, candles and snowballs are part of a special Christmas tradition. When the temperature and snow is just right, snowballs are made about the size of an apple. These snowballs are then hollowed out in the middle to allow space for a small candle. Once the candle is lit, these snow lanterns can be placed outside homes and along gateposts to light a path. Several snowballs can even be grouped together to make a bigger, brighter snow lantern!

On Christmas Eve, people in Finland also put up a Christmas tree and decorate the dinner table and windows with more candles. The warm glow creates the perfect, cozy atmosphere for a family dinner, singing and laughter. After dinner the famous Santa Claus or Joulupukki arrives to give out his presents. As Santa Claus lives in the northern part of Finland called Lapland or Korvatunturi, he delivers all his presents in person throughout Finland.

I had a lot of fun researching Finland Christmas for my latest release, Cloaked in Christmas. A tale about wolf shifters, fighting for the ones you love, and a sprinkling of festive magic. Here are a few more details I discovered while researching:

- Joulupukki also means ‘Christmas Goat’, which was a traditional Yule Goat who demanded presents from people! Over time, Santa Claus became the gift-giver, but the name hasn’t disappeared.
- If you have been naughty, you could end up with a bag of coal under the Christmas tree.
- Rice pudding is a traditional Christmas Eve breakfast in Finland!
- Relaxing in a sauna is a popular way to spend the end of the day after Christmas celebrations.

How do you celebrate Christmas? 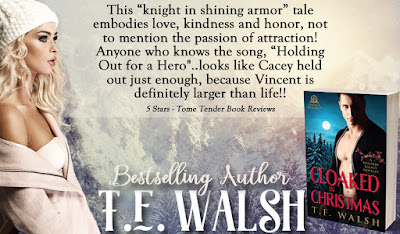 About CLOAKED IN CHRISTMAS:

After fleeing her abusive ex, wulfkin Cacey Varg and her daughter settle happily with a new pack in Finland. As Christmas approaches, Cacey learns her ex has found them and is on his way to take their daughter back. But a massive snowstorm prevents her from packing up and leaving town - and instead delivers a sexy stranger to her doorstep. Can she trust that he isn't one of her ex's henchmen?

Second-in-command to Europe's most powerful wulfkin, hunter Vincent Lyall's spur-of-the-moment decision to check on his ailing mother soon finds him marooned at a cabin in the woods by the blizzard of the century. Trapped with this spirited vixen, resisting temptation is easier said than done . . . But she refuses to believe he is who he says he is.

Is love powerful enough to win when two sexy wolf shifters, an unwelcome past, and animalistic urges wreak havoc on the holiday season?

Cloaked in Christmas is a standalone story in the Wulfkin Legacy series and only 99cents. 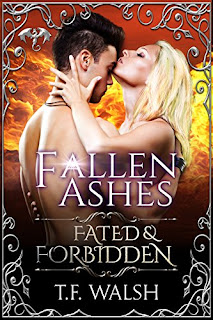 Last of your kind? Check. Being hunted by everyone? Check. Waking up magically bound to the world's most cocky and annoying assassin? Wait, what?
Survival has always been on the top of Fallen's To Do List as being the last Dragon shifter in Tapestry had painted a target on her long ago. But after being captured and magically tethered to an assassin who could kill her in an instant, time is running out. With the fate of an entire world at stake, Fallen has to find a way to get out alive, with or without her unwanted companion...her incredibly sexy unwanted companion.
Exiled from the Kingdom and on a mission to save his stepfather from the Collector, Saber's life is already a mess. But he never could imagine that he'd be hexed into a mindless shadow assassin or worse, being kidnapped and mystically-bound to a hot blonde vixen that has a crazy obsession with fire. Sexy/strange/fire-chick aside, he has got to find a way to get out of there but Fallen isn't in the least being helpful with their escape plan. Seriously, can things get any worse?
Magically-bound, determined, and both fighting an undeniable attraction, can Saber and Fallen work together to free themselves and save their world by defeating the Collector? Or will time slip out of their grasp and all will be lost? 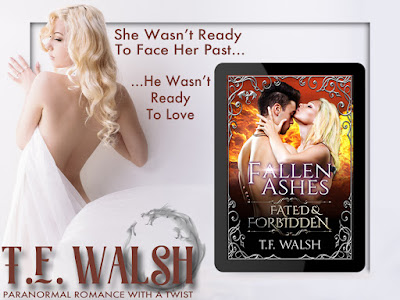 Sign up here for T.F. Walsh’s newsletter to keep up to date with latest releases, special offers, and exclusive content.

T.F. Walsh emigrated from Romania to Australia at the age of eight and now lives in a regional city south of Sydney with her husband. Growing up hearing dark fairytales, she's always had a passion for reading and writing horror, paranormal romance, urban fantasy and young adult stories. She balances all the dark with light fluffy stuff like baking and traveling.

I hope you find some sizzling reads this holiday season! And don't forget to stay tuned for the Holiday Book Feast in three weeks!! December 24-31 at fantasybookgiveaways.blogspot.com. A giveaway plus LOTS of 99 cents book deals!