So, this week there are two exciting things I want to share with you. First, Talli Roland's book, Construct a Couple, is out today! You can click here to purchase on Amazon, and don't forget to stop by Talli's blog on Wednesday for the official launch party.... it's bound to be fun.

Secondly, Jennifer Hillier is having a super fun flash fiction contest on her blog and is giving away ARCs of her book, Freak, due out in August! And some Amazon gifts cards... Just write a story between one sentence and 150 words in length, containing the word freak. Pop on over there to enter - you have until the 17th. Fair warning - if you read my entry, it contains foul language and subject matter. Jennifer said to make her cringe - so I went all out and had fun being bad for a change. Also, you can and should pre-order Freak on Amazon.


Anyways, here's a bit more about both books: 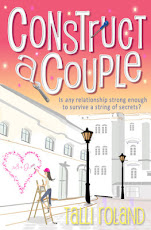 With a great job at a reputable magazine and a man who's the perfect match, Serenity Holland thinks she's laid the foundation for an ideal London life. When a routine assignment uncovers a shocking secret threatening her boyfriend's company, Serenity decides to leave nothing to chance, taking matters into her own hands. Soon, though, she realises keeping secrets isn't as easy as she thought . . . and the consequences are far worse than she ever imagined. 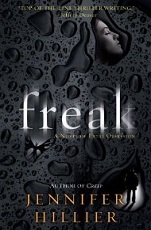 Sitting alone in a maximum-security prison cell, Abby Maddox is a celebrity. Her claim to fame is the envy of every freak on the outside: she’s the former lover of Ethan Wolfe, the killer who left more than a dozen dead women in his wake and nearly added Puget Sound State professor Sheila Tao to the tally. Now Abby, serving a nine-year sentence for slashing a police officer’s throat in a moment of rage, has little human contact—save for the letters that pour in from demented fans, lunatics, and creeps. But a new wave of murders has given Abby a possible chance for a plea bargain—because this killer has been sending her love letters, and carving a message on the bodies of the victims: Free Abby Maddox.

Jerry Isaac will never forget the attack—or his attacker. The hideous scarring and tortured speech are daily reminders that the one-time Seattle PD officer, now a private investigator, is just lucky to be alive. Abby Maddox deserves to rot in jail—forever, as far as Jerry’s concerned. But she alone may possess crucial evidence—letters from this newest killer—that could crack open the disturbing case. With the help of Professor Sheila Tao, seasoned police detective Mike Torrance, and intuitive criminology student Danny Mercy, Jerry must coax the shattering truth from isolated, dangerous Abby Maddox. Can he put the pieces together before Abby’s number one fan takes another life in the name of a killer’s perverted idea of justice?


Anybody else got books coming out soon? What's everybody up to this week? Not procrastinating on writing like me, I hope...
Posted by alexia at 9:18 PM