We're nearing the end of my character profile series! Today we have Eli, Zyan's angelic partner. Without further ado: 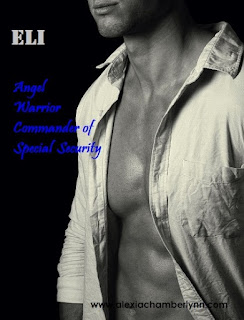 Supernatural powers: Angel
Appearance: Pale skin, straight blonde hair (a bit on the longish side), lavender eyes
See my Pinterest board here for more pics
Favorite drink: Dwarven beer
Weapon of choice: Blast of white light from his angel powers, though he also has a wicked staff he uses occasionally

Eli and Zy's chemistry is so fun to write. I mean, she's a soul thief, he's an angel? Talk about some tension. Eli is Zy's opposite: rule-abiding, a bit stuck-up, almost totally straight-laced... at least at first. He's also incredibly compassionate and good-hearted and can be a real badass in a battle. They play off each other so well.

Here's one of my favorite Eli excerpts from Martinis with the Devil (it took me a really long time to pick which one, without being too spoiler-y). This is close to the beginning of the book; Zy has just arrived at the hospital to check in on her friend Will after his bar burned down, and her and Eli saved him. It's trimmed a bit in the middle for brevity.

We found the ER nurse’s station. One quick lie and an ensorcelled nurse later, and we were standing outside the curtained-off temporary room where Will lay. He’d been plugged up to an oxygen machine.

“Now what are you doing here?” Eli asked, arms crossed over his chest.

“What, have you switched from HR security to ER security?” I rolled my eyes. “Will is a good friend of mine. What were you doing at the bar?”

“I’d heard there’s a new Assembly member and that he’d stopped by earlier. I went by to check it out. So, do you know what happened tonight?”

“Yeah.” I cast a guilty glance over at Quinn and Riley, who stood against the wall. “I ran into my ex earlier, and we’re not exactly on the best of terms, so Will kicked him out of the club. My guess is, Alexander came back to exact revenge. He’s pretty prejudiced against some of the supes like the Cyclopses.” I paused. “Oh, and by the way, he’s the new Assembly member, and the one that’s been trying to knock off the HR.”

Eli’s eyes narrowed. “When exactly were you planning on telling me this?”

“Chill, okay? I didn’t realize when you were at Noir that it was him. But then at Will’s bar, it hit me. Since I want the lowlife immortal dead as much as you do, I hired some help and figured we’d take care of it for you.”

“Yeah, well clearly that plan’s working out fantastically,” he said, his tone razorblades and jagged glass.

Goddamn, was everyone trying to piss me off tonight? “You’re a total asshole. Has anyone ever told you that?”

A groan rose up from behind the curtain. “Oooh, are we skipping right to the dirty talk? I dig it.”

“Will!” I shoved back the curtain and gave him a very careful hug. “Jesus Christ, you had me so worried!” Eli threw me a reproving look for dropping the J-Bomb. Like I freaking cared.

“Well, I had to get your attention somehow.” He grinned weakly.

“Please don’t say stuff like that.” My hazel eyes searched his face. I drew in a long breath. “It was Alexander wasn’t it? The guy from earlier?”

Will’s expression became somber, a look I’d never seen on him before. It made it a bit hard to breath. “Yeah, I’m pretty sure. I had run down to the wine cellar to get a case of Pinot Grigio when I heard someone follow me down. I turned and saw just a flash of black hair right as something hit me over the head.”

My eyes were directed very carefully at the chalk white sheets on the hospital gurney. I raised them up to Will’s, trying to keep my emotions at bay. “He’ll pay for what he’s done, Will. I’m not going to let him get away with this.”

“Don’t do anything foolish on my account,” Will said, squeezing my hand.

“She won’t,” Eli said, stepping up on the other side of Will’s bed. “Alexander is under official investigation by the HR’s security team, and he’ll be brought to justice through an official legal process.”

“Since when has hiring soul stealers been an official legal process of the HR?” I snapped.

“But you tried.” I flashed him my very best you’re so full of shit smile.
Eli opened his mouth to speak, but someone cleared their throat very loudly behind us.

“Excuse me, I’m Dr. Harris and I need to check on this patient.” The woman looked down at the chart in her hands through rectangle glasses. “Uh, William Evers.”

Quinn and Riley popped their heads in to say goodbye to Will, and we all strode back down the hall.

“I’m going to need you to accompany me to HR headquarters,” Eli said after less than ten paces. All business again.

“And why is that?” I raised my brows.

“Because, if you’re going to assist in bringing in a known assassin, you need to be officially briefed.” He didn’t look at me as he spoke, just sauntered fluidly down the hall.

“Oh, so now I am hired? Which is it? I’m starting to get whiplash.”

Quinn and Riley’s eyes darted back and forth between us, Quinn’s expression one of apprehension, while Riley looked like he was laid out with some popcorn watching a juicy soap opera.

“Well, the official decision is up to the HR. He said he wanted to meet you.” Eli glanced over at my face this time, to judge my expression I guess.

I attempted to keep my face neutral, though the fact that the HR wanted to meet me was pretty surprising. “Whatever. But this is going to be on my terms, or I’m out.”

I heard Eli grind his teeth together. “You’ll work within the law or you’ll be arrested.”

“I’d love to see you try.” I laughed, rolling my head back and putting some oomph into it, which served its intended purpose of making Eli even more agitated.

“Tell me something I don’t know.” I stopped walking and put a finger on his chest. It was as rock hard as it looked. Not that I cared. “You are way too serious. Like, the king of serious. Loosen up a bit, okay? I’ll go with you to meet the HR, and we’ll see what he has to say about all this.”

Hope you enjoyed it! Eli's character arc over the course of the book, and into the second and third books, is really fun to watch unfold. Hint, hint: announcement of the release date for the second book, Whiskey and Angelfire, and the cover reveal coming soon!