At long last, we come to the last character profile in the series, Zyan herself!! I have so much love for Zyan. Martinis with the Devil, the first in the series, is the only book I've ever written where the character was the inspiration for the whole thing. Usually I have a cool plot idea, the great "what if?" question that pops into a writer's head. But Zyan came, rather insistently and incessantly, after I read the Twilight series years ago. She started pounding in my head, like "that whole finding your true love at 17 is great and all, but what happens if you're wrong about the person, and you end up totally screwed and immortal so you can think about how much of a dumb ass you are for all eternity?" Yeah, she's fairly sarcastic :)

I'd written another fantasy novel before Martinis, and had a hard time pinning the voice for that character, but not with Zy. She came in loud and clear, and the words just flowed. Plus, she's so fun, feeding my obsession for chicks with swords, martinis, and bad language. Okay, so here she is! 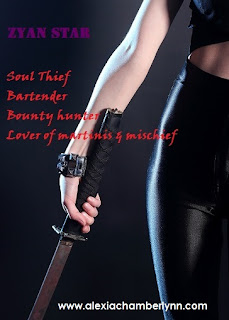 Zy is pretty much a total badass and never behaves herself :) I warn people, if you don't like magic, violence, sex, cussing and mouthy women with swords, you will most certainly NOT like these books.

It's practically impossible for me to put in a fave Zyan excerpt, because I love so many of them... I'm going to be a tease and include one from the second book, Whiskey and Angelfire, which releases on July 4th. Also, I JUST got back the cover from my amazeballs cover artist, and I literally cried a little bit it's so perfect. My newsletter subscribers will get to see it before anyone else, so sign up if you haven't already. I'll also be giving away some ARCs. Okay, so here we go - Zy and the gang have just arrived in Dublin to search for a missing angel (NHTF stands for non-human task force and HR stands for Holy Representative):

The interior of the building was stark and militaristic, not in the slightest bit welcoming. Looked like the NHTF had definitely taken the lead in décor. It had none of the elegance of the lobby in HR headquarters back home. A single desk stood at the back of the room, behind which sat an angel in the usual pale gray tunic, and an NHTF officer in an olive uniform. To the right of them was a door, flanked by two more officers. Though it was only a couple hours until midnight, none of them seemed surprised to have visitors. Eli stopped in front of the desk and cast a quick salute. He’d changed when I went home, and now wore the same sort of tunic the other angel did instead of the jeans and t-shirt he seemed to prefer. It covered up all his nice muscly bits, which was a tad tragic.

The nameless angel and NHTF officer nodded. The NHTF officer leaned to the side, casting a glance that slid off me like I was five-day-old roadkill. “And these are?”

Eli opened his mouth to speak, but I stepped around him. “Special Agent Zyan Star. Yes, THE Zyan Star. Appointed by the HR of Northwest America after saving his life and preventing Lucifer from taking over the realm of Earth.”

They looked me up and down, taking in my burgundy hair, leather jacket and jeans. Not to mention the big-ass katana strapped across my back. And the emerald green nail polish.

I hooked a finger over my shoulder toward Quinn and Riley. “And these two were instrumental in helping me and Eli - Commander Whitesong, that is - save the planet’s ass. We’re here to find the angel you guys lost.”

Eli cast me a reproving look as we waited, but I just grinned in return. A couple minutes later the two NHTF officers guarding the door pulled it open and a tall angel emerged. Her hair was short and red, her eyes a startling purple, bright unlike Eli’s pale lavender ones.

We entered the depths of the building, passing through stark white hall after stark white hall. What was it with them and decorating like a mental hospital? We reached what was clearly a command center, a busy room with banks of screens and holographic programs running. Angels and NHTF officers stood together, monitoring video feeds, calling out commands into their comm devices, and repositioning various satellite feeds.

“After Officer Lightwing went missing, we tapped into our global surveillance network to see if we could pick him up via facial recognition scans,” Juno said, confirming my thoughts. “We also of course have the supernatural DNA scanners in all businesses to track the supernatural population. It picks up angels as well. Nothing matching his DNA signature so far. Wherever he’s been taken, it’s off the grid.”

Hopefully not off the grid as in dead, I thought grimly.

“His apartment was pristine, not a trace of a struggle or any suspicious DNA evidence,” she continued. “Of course, not that we really expected anyone to have taken him out from under our noses in this building. We’ve interviewed his contacts outside the angelic forces and no one has seen or heard anything pertaining to his whereabouts.” She sighed, her purple eyes troubled. “He simply clocked out of work two days ago, presumably left the building to run an errand, and vanished from there.”

“What makes you certain he was abducted?” I asked.

Juno looked over as if noticing me for the first time. Her face bore a look of confusion. “What else could explain his disappearance?”

I shrugged. “Maybe he didn’t want to work for the angelic forces anymore.”

The female angel went stiff as an oak. “Angels do not abandon their position, Ms. Star.” Her tone was arctic. “Unlike the other supernatural races, we are born and carry on our lives to fulfill a very specific purpose: to protect humanity. It is our duty, pure and simple, and not something we can simply walk out on.”

I let her insult of other supes slide right on by. “That’s all very noble, but I’ll repeat my question: do you have hard evidence that Ambriel was abducted?”

“I don’t need evidence.” Juno’s eyes bored into mine. “I’m not sure how the HR in Seattle handles things, but we follow a very strict code of conduct here in Dublin. We’re not accustomed to bringing in outside help on our missions, let alone someone of your… reputation. Not all of us are keen on your involvement in this, so I suggest you tread lightly if you wish to continue employment with the angelic forces.”

I smiled broadly. “Let me clarify something about my reputation, as you seem to be confused. I follow no code of conduct and I never tread lightly. That’s why the HR asked for my help, and later promoted me to special agent. I get shit done. And another thing - I am no one’s employee. I choose the cases I wish to work, and since so far your team here in Dublin has failed to find even the tiniest lead in Ambriel’s disappearance, Eli and I were called in to salvage the situation. I respect the HR, and I’m working this case as a personal favor to him. You can fire me if you wish, it makes no difference.”


So there's some Zyan for ya! Hope you enjoyed. Check out my newsletter for the droolworthy book cover. TTFN!
Posted by alexia at 10:15 PM