I'm over at Erica and Christy's blog talking about Zyan Star (naturally), my greatest mistake, greatest success, something other things, and most importantly, my gnocchi recipe!!

Pop over and say hi!

One Year Self-Pubiversary - What I've Learned

At the beginning of 2015 I decided that it would be the year my writing career moved forward, one way or the other. It would be my seventh year of writing with the aim to be published, not counting all the stuff I wrote in my teens thinking I could publish (ha!). So, on August 7th, 2015 I released Black Magic and Mojitos, the prequel novelette to the Zyan Star series. Ironically enough, I signed with my agent two weeks later for a different series.

Initially self-pubbing was exciting, and then fairly disappointing with little sales coming in, and then things caught on and it's been exponentially growing in a short period of time. I sold 1,800 books in the month of July, with another 1,000 or so downloaded in a free promo. Black Magic and Mojitos is on the top 100 bestseller list for sci-fi fantasy short reads most of the time, and Martinis with the Devil hit #5 in Paranormal Romance with angels a few weeks ago. I've been having SO much fun, and I wanted to share what I've learned. Caveat: each person's path is different, so what worked for me may not work for you. I don't particularly care for most of those writing and publishing posts that insist on one and only one way to do something. So, use what resonates with you, don't worry about the rest. Here we go!

Before you roll your eyes, let me elaborate, and provide a caveat. Caveat first: if you love writing, and you want to share your writing no matter what, I think anyone has the right to express themselves artistically and creatively. Don't let anyone stop you. Now, taking that one step further, if you are wanting to self-pub with the aim of making some money, or breaking into the market, I think some things should be considered. If you write your first book and try querying for six months and want to self-pub just because querying sucks man, and all those agents are idiots, well... I'm going to venture that probably (not definitely, but probably) your book is not ready, and you are probably not going to like the publishing world in general. Self-pubbing doesn't avoid the haters, trust me. If you slap something up on the net you're likely to get bad reviews that hurt a lot worse than those form rejections from agents. Because EVERYONE gets bad reviews. And you have to be able to roll with the punches.

The reason I chose the Zyan Star series to self-pub was because I'd gotten a lot of agent interest, with many saying that they loved it and the writing was good, but urban fantasy was too hard a sell right now. Too hard a sell for the traditional market, that is. I had also gotten overwhelmingly positive feedback from numerous entries in contests like Write Club, where your entry is anonymous. So, point being, get feedback from lots of people, not just the ones that are going to be nice to you.

2) Have an amazing cover.

It's true, guys. We ALL judge books by their covers. And if you self-pub, you don't want anyone to be able to tell by looking at the cover that you self-pub. Covers help sell books. If I see a crappy book cover I wonder how serious the writer is about their writing, and wonder at the quality of the book itself. Does that make me an asshole? Possibly. But I can tell you, I'm not the only asshole out there. Don't shoot yourself in the foot at the onset. Make a stunning first impression.

And P.S. this doesn't mean spending a ton. My guy (the amazingly talented God of cover design, Steven Novak, Novak Illustration) charges less than a hundred dollars for an e-book cover.

3) Pay attention to the self-pub authors that are making it.

When I ventured into this, I contacted RaShelle Workman, a self-pub author with over a million e-books sold. That's a LOT of books. She makes her living writing full-time. Total rockstar.

I contacted her first about her cover artist (she referred me to Steven). I later asked her about marketing tips (see below). And I lot of it I learned by observation. For instance, if you look at her and some of these other baller self-pub authors, they have at least the first book in the series priced at 99 cents, and sometimes several of them (or all). I'm actually going to use that to segway into my next point...

Those of you familiar with Amazon will know that if you price your book between $2.99 and $9.99, you get 2/3 of the profit, whereas if you are above or below that bracket, you only get 1/3. Thus, I see a ton of books out there from brand new authors priced at $2.99. Personally, I am not going to spend $2.99 on the first book from an author I don't know. I'm cheap, yes. But kind of like the asshole comment above, so are many, many other people. We live in a world where jerks buy e-books, read them, and then return them for a refund (which I think is totally awful BTW). Again, don't shoot yourself in the foot. Make it EASY for people to take that chance on you, as a no-name author. See above about the rockstar ballers charging 99 cents. They have made hundreds of thousands of dollars on their e-books. If it works for them, it could work for you. There's a lot of debate about this: if you pick 99 cents you don't have worth in yourself as an indie writer, etc., etc. That's not what it's about. It's about building an audience. I'd rather get my books in readers' hands.

I mentioned at the beginning that after some initial excitement releasing Black Magic and Mojitos, the sales dropped off. I was bummed, obviously. So I contacted RaShelle and asked her what her marketing ideas were. She took the time to look up my book (have I mentioned she's a super nice rockstar baller?) and said that with only one book out there and nothing else for readers to buy, I had lost momentum. She said her most important suggestion to anyone was to have a series with at least five books, and release the first half of the series in close succession. She suggested every few weeks.

With the Zyan Star series, I had initially planned to release Martinis with the Devil shortly after Mojitos came out, but then I signed with my agent and she wanted me to wait. After a few months of being on sub, we came to a compromise, which was that I could release the Zyan series with the books being cut in half, so they technically weren't novel length (this was just trying to preserve my debut status, that weird publishing world virginity thing). Within a few weeks of releasing Martinis parts one and two, sales started to grow rapidly. And that brought in a new influx of sales for Mojitos. A couple months later I released Whiskey and Angelfire parts one and two, and the same thing happened. So, so far RaShelle's advice is spot-on. I also think part of it is that having multiple books out just makes you look like a more serious writer. And a series lends itself to branding yourself and building a set of fans potentially more than individual books do.

6) You don't have to pay for expensive ads (or at least proceed with caution).

I'm going to start this one with a BIG caveat. I have known other authors that have seen spikes in sales from paid ads. I personally have had zero luck with them. Since I have a full-time job outside of writing, I luckily had money to spend several hundred dollars on ads. I got an expensive Goodreads ad and a blog tour, and lots of other supposedly life-altering social media promos. None of them did much, at least nothing noticeable. One problem with a lot of these services (blog tours, newsletters, etc.) is that your audience is other writers. While writers are certainly readers, it's not the same as tapping into a pool of readers that are ready to spend money on books. Since us writers usually have lots of writer friends we like to support, and because we're more picky about writing, we tend to be a little more stingy about buying from new authors we don't know.

7) Make sure you have a stellar hook and strong search keywords.

Just like with querying, you want the brief description of your book on Amazon, Smashwords, iTunes, etc. to really sing. It should be extremely compelling. Again, look at the successful self-pub big dogs and see what they have in their descriptions.

Also, keyword combos are important. Amazon lets you have up to seven. I made one of mine '99 cents' and one of mine 'urban fantasy' and now when you search under '99 cents urban fantasy', my Zyan books are usually four of the top five results.

8) You might enjoy self-pubbing more if you're a control freak and workaholic.

A lot of people ask me if self-pubbing is hard, because you not only have to write the book, you have to arrange editing, formatting, cover design, marketing, etc. I would say the first trip through was somewhat daunting, but after that it's been easy. I have a checklist for e-book formatting - that's the one really tedious part. But now it only takes me a few hours since I've done it a few times. I am ALL about the checklists - I have a very Type A side to my personality that lives opposite the creative side.

I also like to stay busy, and love being able to control all the different aspects of my book. When I do land a traditional pub contract, relinquishing control will definitely be something I'll have to adapt to. The last year has made me realize that I definitely want to be a hybrid author. I want to have some traditionally published works, but I think I'll always continue to release some of them myself.

In closing...make sure to have fun. If you're controlling your own destiny, enjoy yourself, eh? We're all just a work in progress as humans and as writers. My sales go up and down still, and I worry that somehow it's all going to vanish. But it's not. Because this isn't a static point, it's a step in the journey. Keep writing, keep having fun. Do it because you love it, whether or not you want to make a career out of it. Celebrate the small things and the big things.

And speaking of that, I am raising a glass to myself for an epic first year of self-pubbing and self-discovery, and to you if you read this far down in the post! TTFN, friends! 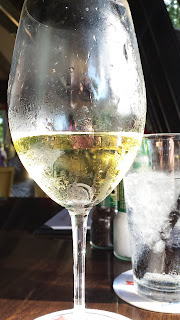