Werewolves and Genies, Oh My!!

Hi friends, today I get to announce book birthdays for TWO good writer friends! That's always such fun :) I have read the first books in both of these series, and loved them! Wulfkin Legacy is super steamy paranormal romance and Once Upon a Djinn is sassy urban fantasy. Check them out! 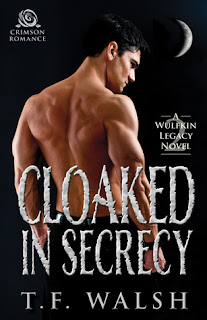 Cloaked in Secrecy by T.F. Walsh
(The Wulfkin Legacy #2)

What better way for a pack of wulfkin shifters to remain in seclusion than to hide in plain sight?

Death has followed Alena Novac’s circus family for years, but when the police arrest her brother for murder, she must rescue him before he transforms behind prison walls. With less than a week to execute her plan, a member from the Varlac family who murdered her mother reappears. Now, Alena has to decide whether to make good on her promise to avenge her mother’s death or risk rescuing her brother.

Enre Ulf has one mission – prevent Alena’s father from claiming his territory and slaughtering his wulfkin pack in Transylvania. Enre may have turned his back on his Varlac heritage, but that doesn’t mean he won’t impersonate one to infiltrate the circus clan and take out their alpha. Knowing that his secrets will lead to his demise, Enre takes the risk in order to save his home. What he never planned on was his wolf claiming Alena as his mate.

Now with the police closing in, and the real Varlac threatening them, Alena and Enre must overcome their pasts to save their packs’ futures.

There's also a giveaway for a $10 Amazon Gift Card and  two Cloaked in Secrecy ebooks: 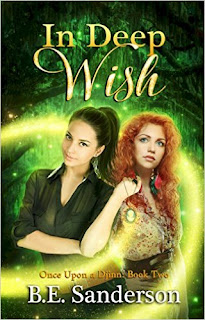 In Deep Wish by B.E. Sanderson
(Once Upon a Djinn Book Two)

The conspiracy to devastate Jo Mayweather’s life is growing like blue fuzz on last month’s leftovers. Her ex-lover, Zeke, is missing. Her friends are under attack. Her livelihood is in jeopardy. But whoever’s behind the turmoil doesn’t realize they’re messing with the wrong genie. Jo will do whatever it takes to blow their plans apart, recruiting the help of old friends and new allies. She’ll even enlist the aid of some crazy gods if she has to. Anything to stop these bastards from their ultimate goals—her death and the enslavement all of djinn-kind.

Add to Goodreads or buy on  Amazon or B&N!

Help me wish these ladies a happy book birthday!!

At long last, Martinis with the Devil, the first book in my Zyan Star urban fantasy series, is coming out on April 11th! 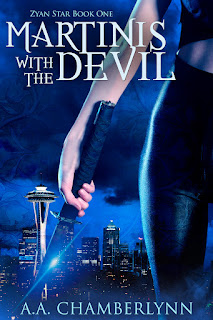 As some of you may know, I was all ready to release it last fall. Then, I signed with my agent, and we decided to wait to release it while shopping for publishers for my other fantasy series. Well, we're still on sub, and have a third of the publishers yet to respond, but Sandy gave me the go ahead to move ahead with the Zyan series! What I'm going to do is release each book in halves, part one and two, so that they're published as novellas and my debut novel status is preserved for my other series. I'm so excited!

What's exciting for my readers is that Martinis with the Devil part one and two will be FREE for at least the first two weeks. I want to really come out of the gates strong, and that's where I need your help! I am using Thunderclap for spreading the word via Twitter, FB and Tumblr. It's a crowdspeaking platform that has supporters sign up ahead of time, and then it blasts out all the messages at once on my launch day. It's really cool, but I have to get 100 supporters or it won't blast out, kind of like crowdfundraising (Kickstarter and whatnot). So, most of my focus is going there, please sign up for a tweet, FB or Tumblr post!! I will love you forever :) Here's the link.

If you'd also like a free ARC, and/or want to help me spread the word via a blog tour, etc., please click here and fill out a super quick Google form so I can keep track. You can also fill this out if you are doing the Thunderclap I mentioned above, just so I know who's signed up.

If you want to read more about Martinis, click the My Books link on my blog menu. I'm so stoked to finally be sharing it with the world! The fun will keep coming too, because I also plan to release book two, Whiskey and Angelfire, and book three, Vengeance and Vermouth, over the next few months.

You guys rock, and as always, thanks for sharing this journey with me!