Hi guys, today I'm sharing an excerpt from a friend's book that came out a couple weeks ago... cowboys and Australia and romance, oh my! Enjoy :) 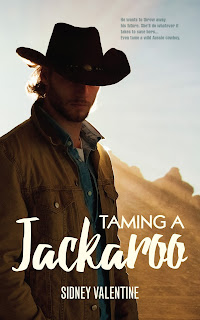 Affrica lounged on a wooden bench in the mechanic’s garage, fanning herself with the map and batting away flies. Sweat dripped at her nape, and each inhale of burning air stung her nostrils. Everything smelled stale.

Brian approached and handed her a can of fly repellent. “The buggers here have teeth.” He chuckled.

“Thanks.” After spraying herself, she reconsidered her decision to accept a ride in Sam’s car.
Yesterday, he’d turned her down when she’d pleaded to inspect the well on his property, and now he acted sheepishly, offering her a ride. Maybe she could use the situation in her favour? A grin spread her lips. Oh geez, I sound more like Meebe every day.

She shifted in her seat and her cheeks warmed. Maybe a little bit of humiliation wouldn’t kill her if it meant getting the promotion she needed so desperately.

Sam might be a hunk, but that didn’t make him safe. She remembered Trevor saying that Sam hadn’t been around for the past year. Where had he gone? What guy left his cattle station for such a long time? Probably more interested in spending his fortune than leaving it for his kids. The complete opposite of the kind of guy she imagined herself settling down with one day.

Fine dust particles outside the mechanic’s carport blew inside, whipping around her legs. Old oil containers, tires, a car seat, and half an engine littered the room. It resembled a typical garage, grease and thick layers of grime coating every object. She wouldn’t be surprised if the back of her white shorts turned black.

A faint clip-clop sounded in the distance, and she stared at the road where waves of heat distorted the houses. She imagined the simple lives of the residents of Boulia. Few people, and no traffic or pollution, if you excluded Brian’s garage. However, simplicity came at the cost of scorching heat, few job prospects, and no gourmet corner coffee shops. What she wouldn’t give for an iced caramel latte right now.

She checked her phone for the hundredth time. No message from the courier about her equipment.

Something snorted nearby and she jolted. At the garage opening stood a large chestnut horse. Sam sat atop the animal, and they were both backlit by the daylight. He dipped the front of his hat with his hand, wearing a confident grin. “At your service, miss.” 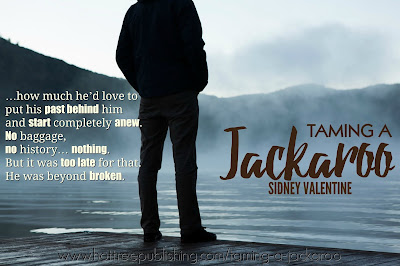 Get Ready for Christmas in July!

Over at fantasybookgiveaways.blogspot.com, we're amping up for our Christmas in July promo event. We're opening it up to all sub-genres of romance, not just fantasy, so MORE books for everyone! Magical, just like Christmas :) 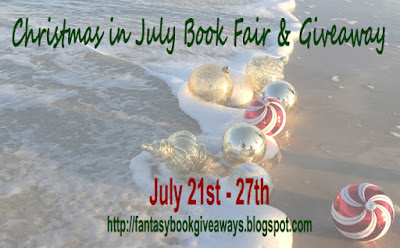 Posted by alexia at 8:29 PM No comments:

Hi, guys! I was recently approached by vegas.com to do a post to help them promote the Vegas Comic Con, based on a couple of my older posts on my trips to World Fantasy Con and Dragon Con. I've actually never been to Comic Con, though it's on my bucket list for sure. I go to cons as a writer, as I have no gaming experience whatsoever other than what my teenager tells me (he's big into it). I'm also a huge geek, so anything Dr. Who/Buffy/Star Wars/etc. is going to pique my interest.

World Fantasy Con is a purely literary con, and the year I went Neil Gaiman was the keynote and did a ton of different things. There are only like 800 people at WFC, so I literally got to be in the same bar getting drinks as Neil. Charlaine Harris was also there. It was AMAZING. At Dragon Con, I got to meet lots of other famous fantasy authors like Laurell K. Hamilton, Jim Butcher, and Chuck Wendig. They were both amazing cons, but quite different.

So, in no particular order whatsoever, here are a few random things I've picked up from cons:

I contemplated briefly wearing something for Dragon Con, and I'm SO glad I didn't. Cosplay people are serious. As in, they spend mega bucks on their costumes. I don't think there's any half-assing it, unless you want to get laughed at. Plus, you will be expected to pose with people for pics constantly, and the better cosplayers really get into their role and act the part of their character. I may be a bit too shy to do that myself...

Be prepared for up close and personal

Cons, especially at night, are sometimes standing room only. Dragon Con, based in Atlanta, has like 80,000 attendees. Basically, a huge portion of downtown Atlanta shuts down and caters to this event. It spans like six hotels, and that's just the primary hotels. When trying to get anywhere inside, and sometimes outside on the streets, you will have to get real friendly with others.

At any given time at a big con, there are tons of different things going on at once. Download the app for the con and plan ahead of time what you care about most. And don't forget to plan for horrendous lines and extra time for all the bodies you have to travel through to get from one place to another. It's so worth it!

If you're headed to the Vegas Comic Con, you can check out the vegas.com travel page (no, not getting paid for the plug, just thought this would be a fun post). Alas, I will not be going, but now I'm having con fever big time... to anyone who is going, have a blast!
Posted by alexia at 12:00 PM 2 comments:

This is a week of awesome new releases! Today I'm helping with another friend's book birthday. I can attest to the excellent steaminess of her romance writing as I've read a number of books she's written under another name. And as you guys may or may not know, I ride horses, so cowboys are definitely on my list of faves :) 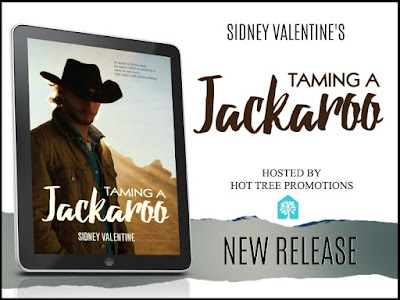 City girl and serial non-dater, Affrica Clarke travels to Boulia, Australia, to investigate the environmental impacts of the local mining company. Unless she proves herself and wins that promotion, she’ll lose so much more than a pay rise. Yet everything goes wrong the moment she lands in the outback. With no research equipment, only skimpy clothes packed by her best friend to help her score a date, and a tight deadline to submit her report, she’s screwed. So when a sexy cowboy offers to play chauffeur, she’s all over it. But she’s there to shut down the mining activities, not fawn over the guy who’s supporting them, no matter how sizzling the attraction between them.

Billionaire jackaroo, Sam Preston tempts fate as an adrenaline junkie, living each day as if it were his last. Angry and wounded, he’s in town to sell his cattle ranch to the local mining company and be done with his past—until he meets hapless city-chick Affrica, who has no clue about surviving in the desert. Sam doesn’t know how to stop being a daredevil even though Affrica reminds him of the happiness he once had.

Can Sam let go of the past before he loses the one person who's finally breathed new life into him, or is it not possible to truly tame a jackaroo? 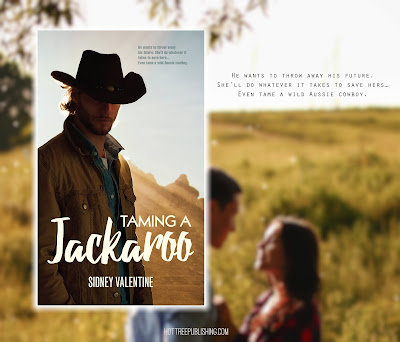 Sidney Valentine is an Aussie girl who loves everything about traveling. She lives in Sydney, Australia with her husband and spends her time exploring the wild outdoors. But she always carries with her a writing pad in one hand and a cup of coffee in the other. While she works in marketing during the day, she never stops writing her romance stories set in Australia as a way to rejuvenate from the bustle of the real world. She is often found at local coffee shops with her laptop, writing about people falling in love.

Posted by alexia at 2:12 PM No comments:

Hi guys, I'm super excited to help my friend Cecelia spread the word of her new release. It's a fun sequel to the first book in the series! Check it out :) And there's a giveaway, too...