Today I'm delighted to reveal the cover for Huntress Lost, the second book in my Timekeeper's War series!! If you are one of my newsletter subscribers, you saw this almost two weeks ago, but today is the public reveal, and also the pre-order launch.

For the next few days, Huntress Lost will be 99 cents for pre-order, but then the price is going up! Also, in celebration of the cover reveal, and in case you haven't read Huntress Found, the first in the series, I am making it FREE on Amazon starting tomorrow through the 14th.

So, without further ado.... 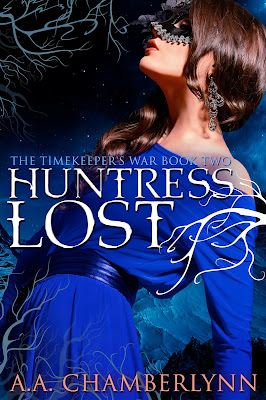 Isn't it gorgeous?? My cover artist rocks. Here's what it's about (SPOILER ALERT BOOK 1):

Evryn thought that learning she’s a descendant of Artemis and part of a clan of Hunters that can jump through time and space was mind-blowing. But that was only the beginning. With Kellan trapped in the Timekeeper’s realm, her mother and the whole city of Skye taken hostage by a rebel Hunter, and the Artifex now living inside of her, she’s got just a few things on her plate. Not to mention she’s been thrown into the midst of a new clan, and her new stepmother and sister hate her. To avert another Hunter’s war and save those she loves, Evryn must seek the aid of the Hunter’s Council. But once she arrives at their headquarters in the Capitol, it’s frying pan to fire. The sinister leader of all the realms wants to keep her as a test bunny for his experiments, more than one person wants her dead, and the Artifex isn’t exactly staying quiet…Evryn may have finally discovered the truth about her heritage, but she’s never been more lost.

So, GO HERE to snag your 99 cent pre-order of Huntress Lost, and HERE (starting the 12th) to grab your FREE copy of the first book in the series.

And save the date for release day, December 26th!! 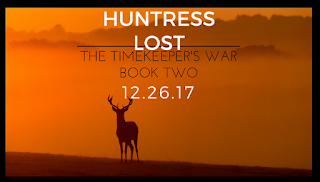 Thanks for stopping by and have an awesome weekend :)