Hubs and I headed into town earlier this morning to run some errands, and he told me that one of the small local bookstores, The Paperback Rack, was having a big sale and had published a plea asking people to visit so they could scrape together enough money to keep from going out of business. Wow, that was an incredibly long run-on sentence.

Anyways, you don't have to twist this gal's arm to get me into a bookstore, since I love my paper and ink and have yet to purchase an e-reader. So, we headed over, and were pleased to see that the store was pretty busy. I have to admit I am not the biggest fan of small bookstores because I'm a child of the age of instant gratification, and I want to know that I'm going to find the book I'm looking for. For instance, I was fairly chagrined when I was told they weren't stocking any (ANY) Neil Gaiman books at the moment (though they sell mostly used books, so I imagine they just have to take what they can get). And, the nice store clerk did recommend some Charles de Lint, since he was a big inspiration to Neil, as well as another book that Neil wrote the foreword for.

It was a fun adventure. I whipped out my Droid and pulled up my Goodreads list, and was able to find four books that I had on my TBR list. And while I was flipping through the Charles de Lint book the store clerk had shown me, wondering if I wanted to buy it or not (I had some other Charles de Lint books on my TBR list, and my pile was getting pretty large), a girl walked by, spotted it in my hands, and asked if I was going to buy it because she'd been looking everywhere for it. I happily passed it over and she was ecstatic. It was a magical book store moment. Another was when some guy went up to the clerk and gave him a check to help save the store, even though he wasn't buying anything. 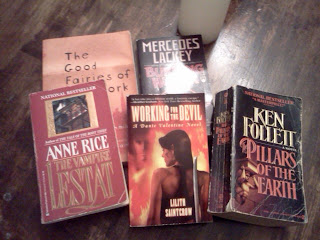 And since you all know how I love posting random pics of my cats -  this is Mr. Fox on my night stand a few months ago (he's grown in size pretty significantly since then): 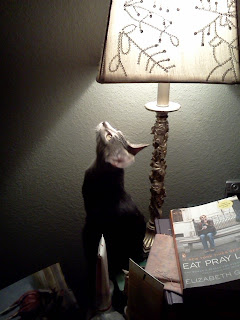 ﻿
I hope everyone's having a great weekend. Any fave small bookstores in your area? Have you paid them a visit lately?
Posted by alexia at 8:11 PM 23 comments:

Happy Monday! Today I'm going to do a hybrid post: my not-abandoned-just-slacked-on meme, When I'm a Famous Author, as well as some pondering on query letters.

First, meme time. When I'm a famous author, I'm going to rock it at several lit conventions each year. I had SO MUCH fun at World Fantasy Convention in San Diego, and I really can't wait to go to another. Being surrounded with others who write in your same genre and being inundated in writerly stuff for several days - sigh. This year, WFC is in Toronto, and next year it's in Brighton, England. How cool is that?? I kind of have a feeling it might in Australia in 2014, because the Australians (Garth Nix and company) made a pretty big show at last year's con. I've also heard Dragon Con is pretty cool, though that's combo lit/comic con. Which cons would you go to every year to party with your writer friends??

On to querying, which I've been thinking about a lot lately. Since in the next couple months or so I'll be donning my war gear and heading into battle... I did something different with my query for Noir. I actually wrote it before I started writing the first draft. I had the voice and the main plot in my head, and it just kind of flowed out. It was interesting because after I finished the first draft and looked back at it, nothing major had changed from the original inspiration. I sort of pinned down the essence at the beginning. Has anyone else ever done this? Would you consider doing it as a pre-planning stage to your novel?

I hope everyone has a splendid rest of the week!
Posted by alexia at 9:20 PM 16 comments:

Man, it has been one roller coaster of a week. Some ups - all the awesome critiques on my query over at the Quintessentially Questionable Query Experiment. Some downs - crazy shit happening at work. But, I am excited for the weekend because I'm finally ready to print out Noir for my first full read-through!

I finished the first draft of Noir on December 4th, and have been letting it have "marinating" time, so my eyes are fresh when I start making editing notes. I did a little work on it over the Christmas break, not editing but researching various things. I never do that during the first draft, but put an @ sign wherever I need to look something up so I can easily search later. And over the last couple weeks I've gone through and replaced all the @ signs with the appropriate stuff, including changing the end slightly because I'd written something inaccurate about Mt. Rainier that was fairly vital.

So, now I'm done, and that baby's ready to see it's first printing! Tomorrow I'm headed to Office Depot and then on Saturday night I'm going to try to read it straight through. I'll only look at big picture issues on this first round (plot, flow, character consistency, areas that need cutting/plumping). I'm super excited!

What are your plans, my friends? Writing or otherwise... I'd love to hear from you!
Posted by alexia at 7:11 PM 17 comments:

I'm Getting My Query Critiqued!

Hello, writer friends! Today and tomorrow I'm over at Matt MacNish's blog, the Quintessentially Questionable Query Experiment, for a query critique! Most of the critting (is that a word? If not, I declare it a new one) will take place tomorrow. Pop over and say hello, follow Matt if you aren't, and put in your two cents on my query for Noir!

P.S. - you may recall that Matt is one of the awesome people I got to meet at World Fantasy Convention a couple months ago. I'd been following his blog for a long time, and it was great to meet him in person! He runs a fantastic blog, and offers tons of great query advice. Definitely check it out!
Posted by alexia at 7:05 AM 12 comments:

I haven't done a really random post in a while, so...

Won't you be random with me? I was sick and working long hours last week (busiest time of the year at my job) and slightly less sick so therefore working more hours this week (yay, eleven hour days!). So, you'll understand my brainpower is limited? Here's my random list:

* I'm reading Eon by Alison Goodman. It has dragons and ancient Asian culture and girlpower. LOVE IT.

* Also been loving Goodreads lately, to go on nostalgic trips into the past and organize what I want to read in the future.

* Had a fabulous book idea in the car earlier, despite working eleven hours. Yay, brain!

* Haven't done any editing on Noir yet. Need to get through this yucky day job craziness first.

* Signed up to do a V-Day blogfest about kissing. Will post link when I'm not braindead.

What about you guys? Dazzle me with your randomness :)
Posted by alexia at 9:50 PM 20 comments:

I hope everyone is having a great first day of 2012! No cataclysmic world-ending going on yet, I presume? I've had a glorious break from work, and have been doing some research for Noir, which involves Seattle, the glacial caves of Mt. Rainier, and angels. I even wrote the first couple pages of my middle grade fantasy, just because I had the itch to write something new.

So, this is of course the day that I reflect on everything that happened last year, and what I want to accomplish this year. Reflection first:

In January I hit 100 followers and had a fun blog party.

In March I went to my first writing conference, a local one in Tallahassee. I got to meet Chuck Sambuchino of GTLA fame! Me and hubs also went to Savannah, Georgia later that month.

In July I started my urban fantasy newsletter, and also wrote a dramatic death song for Borders. I'm still pissed with you for leaving me, Borders...

In October I went to D.C. for work and also World Fantasy Convention in San Diego. What a blast!

December I finished the first draft of Noir and held my second annual Heifer International fundraiser! By the way, your comments raised $30 to help fight world hunger! I made an additional donation as well, and purchased an earth gift basket, which is comprised of bee keeping supplies and tree seedlings.

And interspersed in all that was a bunch of querying for Countless, for which I got several partial and full requests, about 100 pages written on the second book of the Countless trilogy, and a fantasy novella written for my son.

On to goals! I have three big goals for 2012 (complete with loose timelines):