Hi, guys! Zyan is hittin' the road for a month-long tour! I'm super stoked about it. Check out the deets below, including the full tour schedule on the Silver Dagger Book Tour site, and a gift card giveaway! There will be book reviews, guest posts by yours truly, and other fun stuff. Hope you have as much fun as I will :) 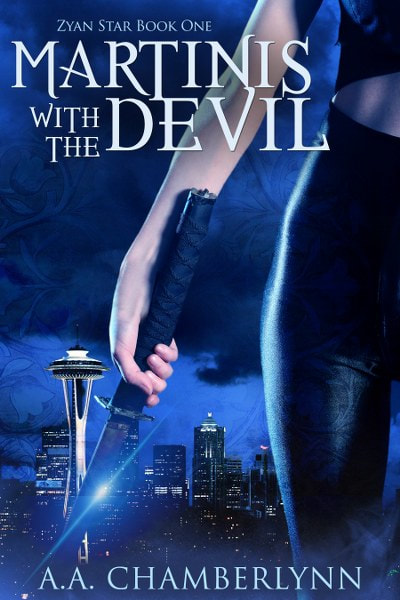 Martinis with the Devil
Zyan Star Series Book 1
by A. A. Chamberlynn
Genre: Urban Fantasy

When offered a job on the Holy Representative’s special security team, bounty hunter Zyan Star couldn’t be less interested – until she finds out it’s her most hated of exes that they’re trying to track down. He broke her heart and dumped her, which in turn led to the loss of her soul at the hands of an immortal soul thief. Now she too exists on a diet of souls, with the occasional martini thrown in for good measure, and she’s had over two hundred years to fantasize about revenge. She just didn’t quite imagine it playing out alongside the emissaries of Heaven.

Working with Eli, the uptight angel that heads up the HR’s security, is just about as much fun as Zy expects. He of course wants her vampire ex brought to justice through legal avenues, which is very inconvenient and incredibly boring. As she dives into the case, however, she realizes there’s more at stake than her plot for payback. Like, the free will of mankind, and preventing the minions of hell from taking over the sovereign dimensions.

This job is going to push her to the limits of her abilities, and there’s just a slight problem with that: the powers she’s suppressed for centuries after losing control of them are exactly the powers she’s going to need to save the HR, end her millennia-old ex and stop Lucifer’s little plot to join the party and invade Earth.

Savior of humanity? Not so much. Or so she thought. 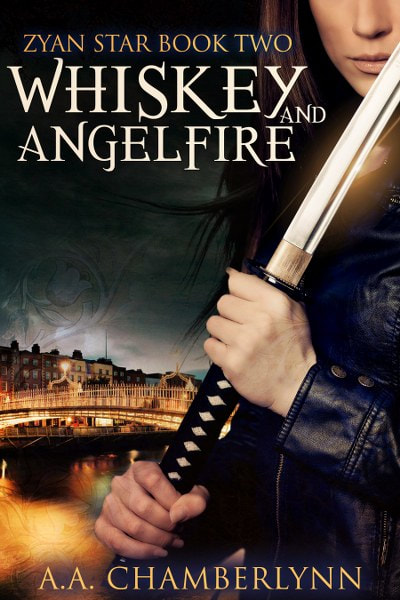 Can Zyan avert the war that’s brewing before her past catches up to her, quite literally?

To add to the mess, Zyan's sister Anna is in Dublin, and where Anna is, Lucifer is only a step behind. Not to mention Alexander, Zyan's sworn enemy. Zyan has more than a sneaking suspicion they’re at the heart of a spree of recent demon invasions. But something is odd about these demons, and if she doesn’t figure it out before Lucifer reveals his ultimate plan, the price could be catastrophic.

As if things couldn’t get worse, being back in Ireland where she was turned immortal has dredged up the worst from her past. Including her maker, Olga, who’s none too pleased that Zyan’s come back. 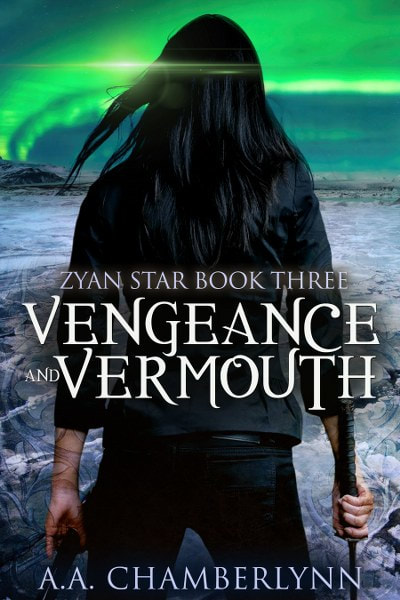 To bring her best friend back from the dead, Zyan will march into Hell itself. But first she needs to amass a force that can challenge Lucifer on his home turf.

With Archangel Michael and the forces of Heaven on her heels, Zyan criss-crosses the globe, gathering a supernatural team of epic proportions. She’s calling in all her favors this time, summoning figures from her past both dangerous and deadly.

And to get into Hell she must work with the worst of them all, the one who murdered her friend in the first place. Zy will have to put aside her burning need for revenge to pull off the biggest mission of her life, but that may prove to be the one thing she can’t do. 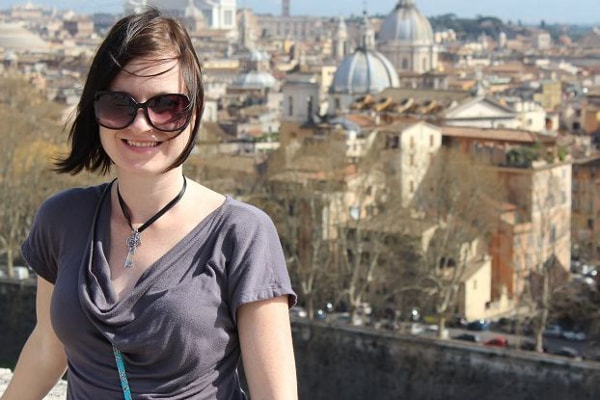 Alexia is the author of the Amazon bestselling Zyan Star urban fantasy series and The Timekeeper's War contemporary fantasy series. She lives in Florida with her son, two cats, and a bearded dragon. When she's not writing or reading, she can be found playing with horses, drinking wine, traveling to the next place on her global wish list, or maybe doing yoga. Dr. Who, unicorns, and katanas make her very happy. She is represented by Sandy Lu of the L. Perkins Agency.

Follow the tour HERE for exclusive excerpts, guest posts and a giveaway!

Thank you all for joining me for a fun week of #Zyanniversary activities! The winners of the Zyan book bundle are:
Erin Smith
Patty Leono Curry
Ellie Wright
Cassie James
Lisa (pepsi03874)
I'll be sending your bundle in the next couple of days! There were no takers on the gift card giveaway for book reviewers, so nothing to announce there.
If you missed my big announcement (hint: a Zyan spin-off series), go check out my Facebook page!
Posted by alexia at 8:41 PM 1 comment:

Hi, guys! I can't believe it's been two years since I released Martinis with the Devil, but here we are. I'm doing another week long Zyanniversary, with a big announcement on Wednesday and TWO giveaways!

The first giveaway is simple: I'll be giving away five e-copies of the complete Zyan Star series. Three full-length novels (Martinis with the Devil, Whiskey & Angelfire, and Vengeance & Vermouth), and two novelettes (Black Magic & Mojitos and Sorcery & Sidecars). You don't have to do anything (I will assume you popped through via my Facebook page), though you get more points if you spread the word on Twitter!

The second giveaway is a $15 Amazon card for book reviewers. I'd like to get more reviews for the Zyan books on Amazon. There are lots of reviews on Goodreads, but not so many on Amazon, and the higher the number of reviews a book has on Amazon, the more it appears to potential new readers. Last year I paid it forward by giving away unlimited copies of all the Zyan books (yep, I totally did), so this year me and Zy are asking you guys to share the love. So, if you posted a review on Goodreads but not Amazon, copy and paste that baby, send me a screenshot at alexiachamberlynn@gmail.com, enter the Rafflecopter below, and you're good to go! Or, if you've read the books but not yet posted a review, give it a go and you may get hooked up with a gift card. Please no fake reviews! I only want honest reviews from my readers.

Here's a link to my Amazon author page where you can find all the books. I'll post all the winners on Sunday the 15th!

Thanks for stopping by for the party!
Posted by alexia at 9:19 PM 3 comments:

Save the Date! Spring Fling Event

Save the date for our next fun giveaway event at fantasybookgiveaways.blogspot.com! 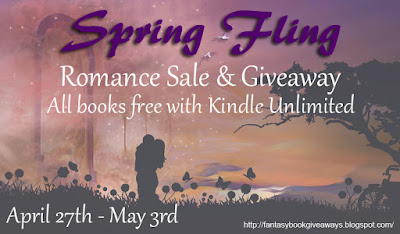 The Importance of Art

On Saturday my son and I participated in the local March For Our Lives, to support the Marjorie Stoneman Douglas kids up in D.C. since we couldn't make it up there. It was a great experience, and these kids are so amazing. I'm just floored by them, and by this movement.

Years ago when The Hunger Games came out, and then all the other dystopians about evil government and fighting back, people kept saying we were raising our kids to be revolutionists. Well, hell yeah we did. And it's never been more timely than now. They are going to change things. What's more, and sort of weird and wonderful, is that Jennifer Lawrence, who played Katniss in the Hunger Games movie, is taking a year off of acting to travel the country and speak to kids and encourage this movement against corrupt politicians. The NRA so clearly has most of them in their pocket, and that has to change. She's truly the Mockingjay, and so are these kids.

There are those that challenge the need for art in society, or say that it isn't necessary. Well, art changes things, and it changes people. It plants seeds. The dystopian stories that swept society helped pave the way for what's happening now. And that's pretty damn important if you ask me.

So, whatever your thoughts on all that's going on in the world today, remember to make good art. Those of you that love Neil Gaiman like I do will recognize that quote. Make good art. Put your beauty out into the world. I'm not saying you have to try to send a message (and often books that do are too obvious about it), but just by being YOU and putting YOUR art into the world, you make it a better place. And you never know what will come of it down the road.
Posted by alexia at 9:40 PM 1 comment:

I'm sharing this for a friend... a spicy redo of the classic Little Red Riding Hood :) Looks awesome! 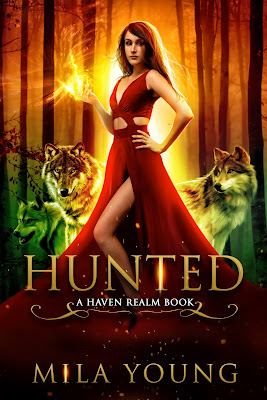 Little Red Riding Hood. Three Big Bad Wolves. A Poisonous Scheme.Scarlet, a healer, lives nestled in the forest surrounded by humans on one side and wolves on the other. But when a rogue wolf attacks her, she's rescued by another pack and taken deep into their den to perform her healing magic on an injured Alpha.The wolves in the forest are under threat from a mysterious affliction, and Scarlet is the only hope they have left. Faced with a mixed pack of threatened shifters, Scarlet must use her wits and magic to survive and unravel the strange affliction now affecting the wolves... All while trying to navigate an overpowering attraction to not just one, but three of the Alphas.Witches, wolves, magic and love intertwine in an exciting mystery that finds its own, unique Happily Ever After.