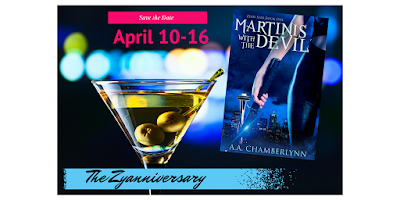 For those of you who may be new friends, Zyan Star is the main character of my urban fantasy series. April 11th, 2016, I released Martinis with the Devil, the first book in the series. I quickly followed with Whiskey and Angelfire, book two, and Vengeance and Vermouth, book three. There are also a couple novelettes in the series. It’s been a whirlwind, and I can’t believe a year has gone by already! So, we’re here to party hard core, because that’s how Zyan does things :)

Here’s the schedule of events for the week: 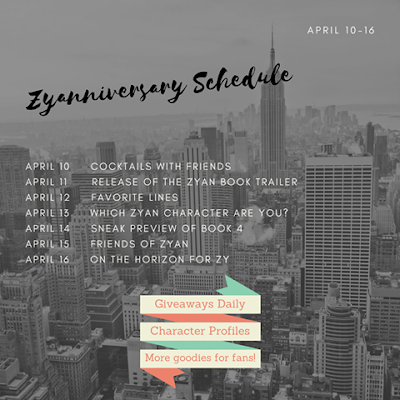 Every day I’ll have a main event, a giveaway, and a character profile or additional goodie for ya. A lot of the party is going on at my Facebook page, www.facebook.com/aachamberlynn, so hop on over there. EVERY DAY I will post a link on my FB page to download one of the Zyan books for free. It’s not a drawing, literally everyone who clicks can get a free book.

I am ALSO doing a Rafflecopter of an e-book bundle with several yummy urban fantasy e-books featuring other authors as well. Enter below. Because I heart you, and Zyan thinks you’re alright, too :) If you have other friends that love urban fantasy, spread the love, eh?

Now, pop back later for the main event of the day, Cocktails with Friends! Fellow kickass urban fantasy author Christine Rains is taking over the blog to share what her characters like to drink, plus Zyan will share her list, and I've got some other fun cocktail and book themed websites for you to check out.


a Rafflecopter giveaway
Posted by alexia at 6:00 AM