What do you get when you cross two Irish writer chics, an epic holiday, and free stuff? 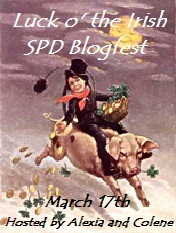 Who: Colene, me and you guys!
What: Mega dose of Irish fun
When: SPD of course (3/17/11)
Where: Linky sign up thing on Colene's blog
How: Sign up, write your flash fiction or SPD/Irish story of 200 words or less (but nobody's really counting), visit everyone else's awesome posts!
Free stuff? Absolutely. Colene and I will each pick our fave post and award the two winners with the new release of their choice!
Go sign up and join us in the Irish debauchery!  Or not-debauchery.  Up to you!
So, not to blow your mind with too much awesomeness in one post, but did you guys see this hilarious Super Bowl ad?  I don't watch football, but I came across this:﻿

This reminds me of when I was a kid and was obsessed with having magical powers, thus the reason I now write fantasy stuff.  Minus the Darth Vader getup, this was totally me! Love it!  Of course, I may or may not currently have dreams about doing magic...

Lastly, my son is now reading the Goblet of Fire (he's blown through the first three in about 3 weeks). I love sharing the Harry Potter adventure with him!  He started reading the first one for a book report and character parade at school.  So, I drew a little lightning scar on his forehead with black eyeliner, and put a cape on him (coincidentally his Darth Vader cape from Halloween), and he already has glasses, so good to go there.  He sat down for his breakfast of cereal and put his hands on the table and said, "Where's my big feast? I'm Harry Potter!"  He grinned up at me and it was one of those priceless moments.  My kid rocks.

So, go sign up for the SPD blogfest, don't forget about my 100 followers celebration contest (more free stuff!), and have a stellar weekend!
Posted by alexia at 11:03 AM